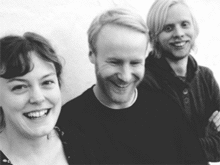 The trio Building Instrument exist in a sort of fantasy-filled no man’s land between electronica, organic pop and something more mystical and fantastic. They had already built a solid fan base before they released their début record to rave reviews in 2014. On their second album, “Kem Som Kan Å Leve” (2016), their mode of expression is deeper and more dreamlike, the soundscape is broader and more substantial, and their music is still extremely addictive and strangely catchy.

With a mix of jazz / folk / improvisation music, these three Norwegian musicians have found their very own unique style. The compositions move from melodic and delicate, to catchy rhythmic patterns, to melancholic and dreamy moods and soundscapes. Building Instrument has within their 10 years taken plenty of time to distil its essence into a distinctive mode of expression.